Barbers who participated at the annual J. Green Mbadiwe and Sons barbing competition recently smiled home with bags of goodies.

The competition is in conjunction with the Wahl Clippers, an international leading brand in the male grooming industry.

Now in its 28th edition, the competition recorded high participation. Over 200 barbers from Lagos state gathered at the Murphy Hall in Yaba area of Lagos state to vie for a spot.

Only 12 participants, however, were eligible in the contest through a lucky dip.

Of the 12 contestants, two were females. They were given 15 minutes to create impressive hair designs on their models. 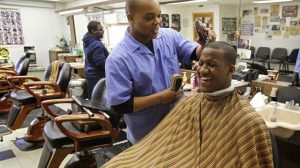 The participants were judged by a group of five who are experts in the barbing field and evaluated their work based on hygiene, creativity, and speed.

At the end of the day, Bashiru Abolore from Mafoluku in Oshodi-Isolo Local Government Area emerged as the first prize winner.

Acknowledging the turnout at the event, Chief Victor Mbadiwe, the chairman of J. Green Mbadiwe and Sons thanked the barbers for believing in their passion despite the little recognition they get in the public space. The philanthropist is among the few Nigerians who constantly ignite hope in the artisans. Most of the barbers who participated in the competition are members of the Lagos State Barbers, Hairdressers and Cosmetologists Association (LABHCA).

He further stated that one of the reasons they increased the number of prizes given to winners in this edition was to encourage them.

“It has always been our tradition to increase the number of prizes we give them in each edition. Previous competitions often see the winners leave with either a cash prize or clippers or both. Wahl decided to do something different with the barber chairs so that they have the right tools to enable them to start their businesses. It is heartbreaking that these artisans are often overlooked despite the important role they play in the male grooming industry.”

He added that subsequent years will be different and he will not relent in celebrating them.

Mbadiwe introduced Wahl clipper to the Nigerian market over three decades ago. Since then, the premium clippers have dominated the market and his company recognised as the sole distributor in Nigeria and West Africa. However, Mbadiwe decried the influx of fake and substandard clippers in the market. According to him, this has disrupted sales and increased complaints from those who have fallen victim to the fraudulent act. However, he is on his toes to ensure that the perpetrators face the music with the help of law enforcement agencies.

To ensure that no one was left out in his largesse, he gave the remaining nine contestants super taper clippers and certificates of participation.

NewsDesk is your news, entertainment, music fashion website. We provide you with latest news and information as it happens and straight from the source.